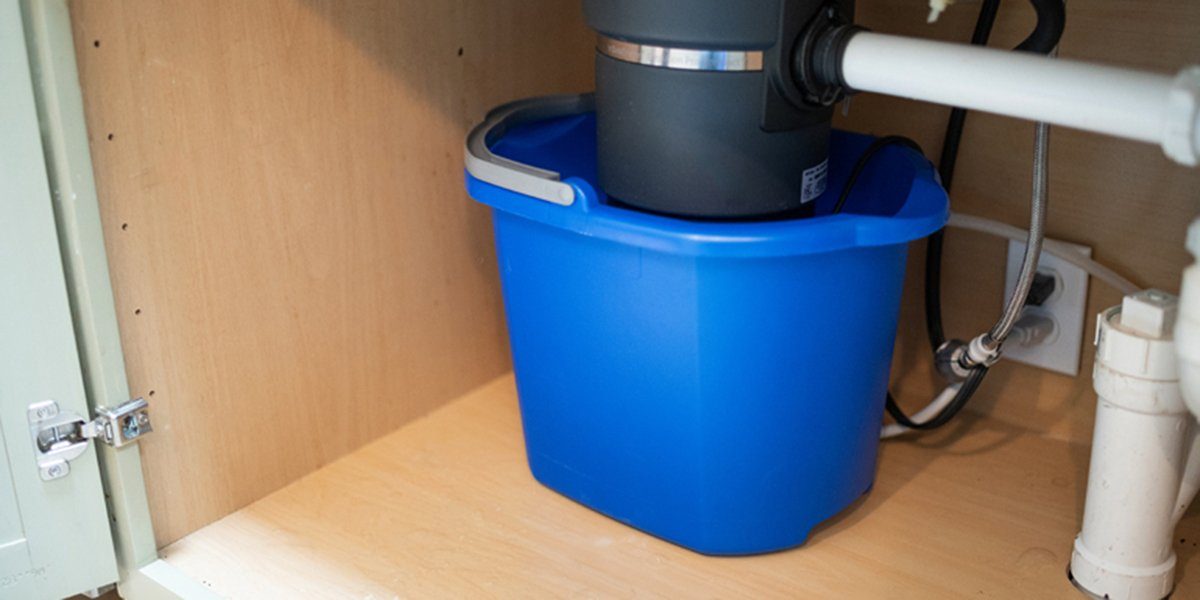 A garbage disposal in your kitchen sink is a convenient way to get rid of certain foods left on dishes and utensils while washing dishes. Some people forget that disposals are part of a home’s plumbing system. Garbage disposals can develop leaks like other pipes, fixtures, and plumbing hardware.

If you’re experiencing this problem, you might ask yourself, “Why is my garbage disposal leaking?” There’s more than one answer, but our Addison, IL, plumbers from Advantage Plumbing & Sewer Co. are here to provide insight into why your garbage disposal is leaking.

For more details about our company’s plumbing services, call us at 847-258-3553 to speak to one of our knowledgeable team members.

You can find several answers to the question about why your garbage disposal is leaking. However, the issue is usually a faulty or improperly installed component. A garbage disposal unit uses multiple parts and connectors to keep water and debris that enters the drain from seeping out. If one fails, you can have a leak on your hands.

Garbage disposal leaks have three primary points of origination: the top of the unit, its side, or its bottom. If you notice a pool of water in the cabinet below the kitchen sink or hear constant dripping without a clear source, you could have a garbage disposal leak from one of those three places. A thorough inspection of the unit will help you pinpoint the actual location of the water seepage.

Even though you can safely perform a visual inspection, be sure to turn off the garbage disposal and unplug it, if possible, before a physical examination.

1. Leaks From the Top of the Garbage Disposal

A leak from the top of a garbage disposal could result from a loose kitchen sink flange. A sink flange is a metal or plastic ring that surrounds the drain pipe at the point where the garbage disposal meets it. The component is prone to rust and corrosion, potentially leading to a water leak over time.

If the leak at the top of the garbage disposal is due to a loose connection, the issue might not be a faulty installation. A hard hit from an object in the disposal could also cause the flange or putty to lose its grip.

You could try to tighten a loose flange connection. Screws cause the compression that keeps the sink flange and garbage disposal connected. Try tensing the screws to create a tighter seal around the plumbing part.

Plumber’s putty is how most garbage disposals attach to sink drains. To reseal the unit, you would need to remove the garbage disposal, remove the old putty, and apply new putty to create a better seal. Whether your disposal uses a flange or putty, tightening the seal can be a messy job and require drain pipe disassembly, so it may be best to contact a plumbing professional for the task.

2. Leaks From the Side of the Disposal

Sometimes, a garbage disposal will leak from its side due to poor drain line connections. If your home has a dishwasher, it likely connects to the disposal unit with a hose to eliminate food waste and wastewater from the dishwasher.

Stop the leak from the dishwasher’s drain line by tightening the metal clamp on the end of the hose where it connects to the garbage disposal. Use a screwdriver to draw the component close and see if that addresses the issue.

Sometimes the problem is the dishwasher hose itself. As you inspect the garbage disposal and drain lines, check the hose for signs of wear, like hard, dry patches, cracks, or holes. If you see evidence of damage, you will need to replace it.

3. Leaks From the Bottom of the Garbage Disposal Unit

Inside your garbage disposal is an internal seal that helps prevent water and food waste from seeping out. Most disposal units have a lifespan of five to ten years, so the seal will develop cracks from wear and tear over time. If the leak develops at the bottom of the garbage disposal, the unit is the problem.

However, repairing an old, worn garbage disposal is a temporary fix that will eventually require a permanent solution. Instead of waiting until the garbage disposal breaks down completely, it would be less risky to contact a plumber to install a new garbage disposal unit soon after discovering a leak on the existing unit’s bottom.

When you seek garbage disposal services from Advantage Plumbing and Sewer Co., you’ll not need to ask, “Why is my garbage disposal leaking?” Our Addison, IL, plumbing experts have the experience necessary to promptly locate the source of your trouble and implement a long-term solution. To request an appointment, call us at 847-268-3553 today.

How to Fix a Gurgling Bathroom Sink: Steps from the Pros
January 30, 2023

How to Remove Rust from Inside Pipes: Best Methods
January 10, 2023

6 Most Crucial Plumbing Fixtures in Your Home
December 30, 2022

What Tools Do Plumbers Use: The Essentials
December 20, 2022